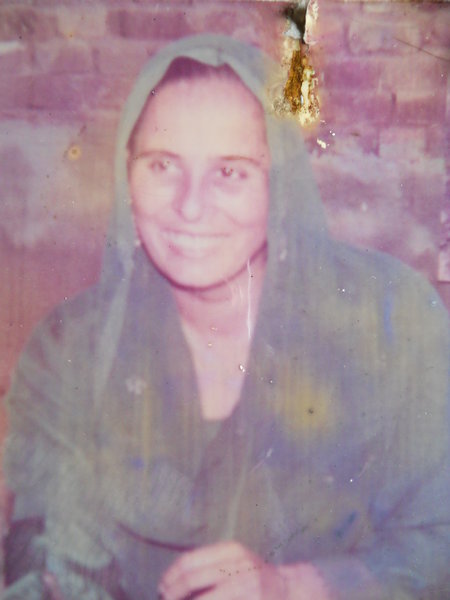 Victim was related to a militant; Victim gave support to militants

The respondent described how the victim's children were returned to the family, "This child then took that individual to the shop there [in Dharaur], the one where she would buy candies from. That individual asked the shopkeeper, 'Who do these children belong to?' The shopkeeper informed him about our relatives [in the village]. We received the children after 16 days. Our relatives from village Dharaur brought them back to us in village Bassian."

Harjit Kaur was a Jat, Amritdhari Sikh, and a resident of village Bassian in Ludhiana. She was 30-31 years old when Indian security forces killed her and her husband. She had studied until middle school and worked as a housewife. She had two children. She was not a combatant; she had voluntarily provided support to the militancy.

Punjab Police detained and tortured Harjit Kaur six to seven times prior to her killing. When Harjit Kaur married her husband, he was a militant. Security forces had repeatedly detained and tortured him several times, as well as his father and other relatives. Harjit Kaur's in-laws believe she was targeted because she was related to a militant, and gave support to a militant. Prior to her killing, Punjab Police had also released all of their cattle, and prevented the family from farming, forcing them to abandon their home.

On July 20, 1992, Harjit Kaur, her husband, and their two children were traveling from Ambala to Chandigarh. At village Lalru, Punjab Police killed Harjit Kaur and her husband. Their two young children, ages three-and-a-half years and two-and-a-half years, survived and were taken by a bystander to a familiar candy shop. From there, individuals asked around, and the children were returned to their grandparents after 16 days. Harjit Kaur's family learned the police had cremated the bodies of Harjit Kaur and her husband, so they went to Lalru police station and retrieved the ashes and photographs of the dead bodies.

Harjit Kaur's family did not pursue any legal advocacy; nor did they approach a human rights commission. They also did not publish a bhog notice. They were afraid of retaliation, and faced repeated detention and torture from the police, as well as harassment that prohibited the survivors from living at their house and farming. Family members also dropped out of school as a result of Harjit Kaur's unlawful killing. Survivors believe the government should establish a truth commission, provide employment to survivors, investigate the abuses, and end ongoing harassment.