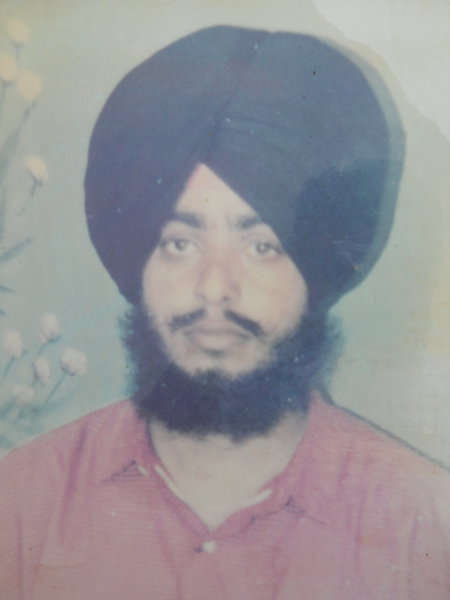 Manohar Singh, also known as Haneri, was a Saini, Amritdhari Sikh, and a resident of village Kahnuwan. He was 26 years old at the time of his killing. Manohar Singh had graduated from 10th grade, and worked at a family-owned rice mill. Narinder Singh describes his brother as a “very good natured” individual whom people “still remember.”

Security officials detained and tortured Manohar Singh six to seven times prior to the detention leading to his killing. The local Station House Officer (SHO) targeted Manohar Singh’s family because his dad had protested illegal police abductions in his village. Manohar Singh’s brother, Narinder Singh, recounts: “[SHO] Bisambar [Das] was angry with my father over this. He held a grudge, and two to three months later, Bisambar Das abducted my brother Manohar Singh...They beat him very badly.” Narinder Singh added that after multiple illegal detentions and experiences of torture, “[f]ed up with the police’s beatings, Manohar Singh joined the militancy.” Manohar Singh voluntarily joined the Babbar Khalsa militant group as a response to his personal persecution and Operation Bluestar--the Indian Army attack on the Harmandir Sahib Complex in June 1984. Narinder Singh believes security forces subsequently targeted his brother because he was a militant.

Prior to the detention leading to Manohar Singh’s killing, the family faced harassment of security officials visiting their home, abducting and detaining family members, threatening them with harm, demanding money or valuables, confiscating or destroying property, and torturing them. Narinder Singh explains, “When Manohar Singh was away from home, police severely beat me, my older brother, and my father. They held my father in police stations for one year. They came to our home and insulted our mother. This continued for a long time. I had to drop my studies.”

Between April 1, 1993 and April 3, 1993, four to five Punjab Police officials, in civilian clothes, from Dinanagar police station arrested Manohar Singh from his uncle’s house outside of Punjab. They had abducted Narinder Singh, detained and tortured him for 8 to 10 days, and then brought him with them to his uncle’s house. His uncle lived in Kolkata, West Bengal, near Andal town in Paschim Bardhaman district. Sub-Inspector (SI) Jarnail Singh and SHO Jaswinder Singh, all affiliated with the Punjab Police from Dinanagar police station, led the abduction. Manohar Singh’s parents, sibling, cousin, and uncle witnessed the abduction, and the security officials informed the witnesses that they were taking Manohar Singh to Dinanagar police station.

On April 17, 1993, at 1 o'clock in the morning, Punjab Police officials from Gurdaspur police station killed Manohar Singh in the village fields in Dorangla town in Gurdaspur district. Punjab Police also killed two other individuals alongside Manohar Singh. One of the co-victims is identified as Baldev Singh, a resident of Dorangla town in Gurdaspur district. Narinder Singh was awake when the police took Manohar Singh and Baldev Singh out of their cells. SHO Prem Kumar of the Punjab Police from Gurdaspur police station participated in the killing. The family does not know of any witnesses to the killing.

Manohar Singh’s family learned of his killing from an article published in a newspaper between April 18, 1993 and April 19, 1993. The newspaper article alleged that police killed Manohar Singh in a genuine encounter.

Punjab Police officials did not return Manohar Singh’s body to his family. The family learned that the security officials cremated his body at a municipal cremation ground in Gurdaspur city and collected his ashes from there. The family does not know the date of cremation, or any other details about Manohar Singh’s cremation.

Following Manohar Singh’s killing, the family did not approach security officials, or a court or commission, due to fear of retaliation and because they believed it would have been ineffective. As a result of of Manohar Singh’s killing, someone in the family died due to depression or shock; they faced a significant loss of income and became impoverished; someone dropped out of school; and the family abandoned their home. The family also faced subsequent harassment of security officials visiting their home, insulting them, threatening them with harm, and confiscating or destroying their property. Today, the family believes the government should provide a memorial for victims.