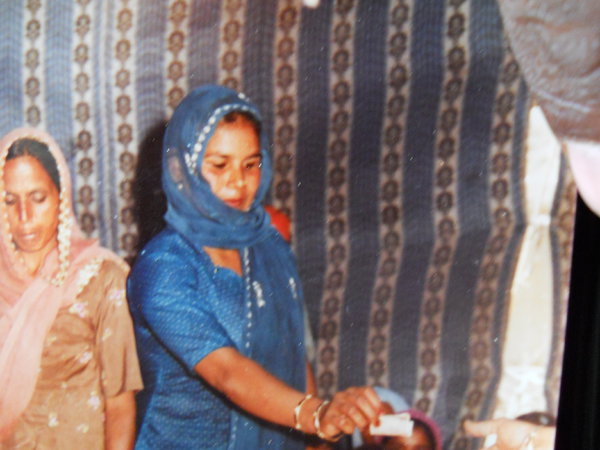 Victim had been severely beaten.

Gurmeet Kaur was a Jat, Amritdhari Sikh, and a resident of village Kalia in Amritsar. She was 24 to 25 years old when security forces killed her. She had not received a formal education and worked as a housewife. Gurmeet Kaur was married and had two children. She was not involved in political activity; nor was she a militant. She voluntarily provided support to the militancy.

Between September 19, 1992 and October 5, 1992, uniformed Punjab Police officials from Bhikhiwind illegally abducted Gurmeet Kaur from her home in village Kalia in Amritsar district. Kabal Singh explains, "At my brother's Bhog, police surrounded our home because my brother was a [member] of a militant group. Police picked up [Gurmeet Kaur] on the day of his Bhog." Deputy Superintendent of Police (DSP) Paramjit Teja of the Punjab Police from Bhikhiwind participated in the illegal abduction. Gurmeet Kaur's parents and a co-villager witnessed the abduction and security forces informed them that they were taking her to Bhikhiwind police station.

Between September 19, 1992 and October 5, 1992, Punjab Police from Bhikhiwind killed Gurmeet Kaur in Amritsar district. They killed one other individual with her. DSP Paramjit Teja of the Punjab Police from Bhikhiwind participated in the killings. Gurmeet Kaur's family learned of her killing from a news article published between September 19, 1992 and October 5, 1992. The article alleged that she had been killed in a genuine encounter. Security officials did not return Gurmeet Kaur's body to her family, and Kabal Singh does not know how security forces disposed of the body.

Following Gurmeet Kaur's killing, the family approached the Punjab Police of Bhikhiwind, but security officials only admitted to Gurmeet Kaur's custody. The family did not file an FIR; nor did they approach a court or commission because they did not know what to do.

As a result of Gurmeet Kaur's killing, her children both dropped out of school. The family has been approached by other human rights organizations and does not fear persecution. They believe the government should establish a truth commission, grant monetary compensation, provide employment, and construct a memorial for victims.